In 2011, if you had asked me what “Indy Wrestling” was, I wouldn’t really know what to tell you. I honestly had no interest in it…not even TNA! Ok, TNA can be argued one way or another, but the way they handled the Bobby Roode (Rooooooooooo) situation at Bound for Glory made me just stop even trying on Thursday nights. But that’s besides the point. I was mostly unaware of the entire Indy scene until my good friend, and tag team partner, Jacob (go #SlightlyBlack) introduced me to Evolve and Dragon Gate USA. I was floored by the level of craftsmanship these guys brought to the ring. It was an easy jump in to also pick up Chikara, ROH, and PWG when I could. I didn’t watch as much as I wanted to, but I’m happy to report that I saw just about every Evolve and DGUSA event that went on this year, including getting to see Evolve life when it came here to Jacksonville. So with that being said, let’s move out to the Indy Edition of my Year In Review. 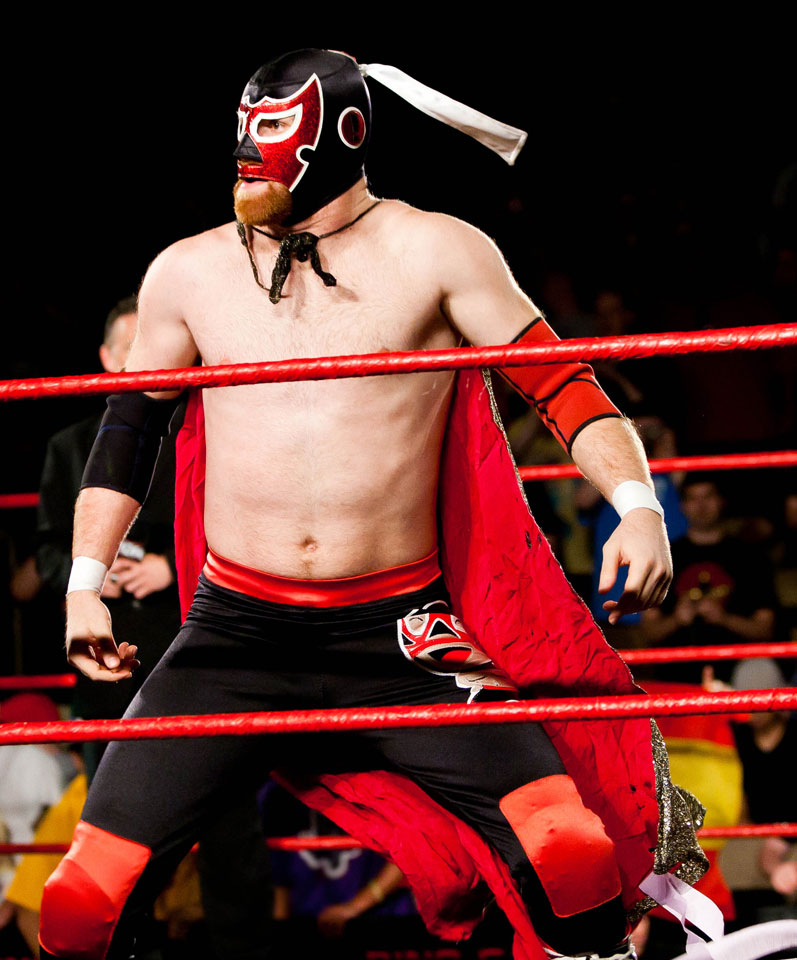 Jacob is not a very loud, rambunctious man when we sit down to watch wrestling. He typically picks his seat on the couch, leans back it a Cold One, and enjoys. So when El Generico’s theme sit during the Dragon Gate USA “Chuck Taylor Invitational” I knew I’d have to pay attention. Jacob lost his mind. And by lost his mind, he calmly stated “Guys…I’m marking out right now.” His performance in the match was awesome, and he went on to have an amazing series of matches in Evolve/DGUSA alone with Samuray Del Sol (one of my favorite “rookies”), CIMA, Ricochet, Sammi Callihan, and more. I dove into his past work, as well as his work with other companies, and I was floored not only with his in-ring ability, but the sheer over the top nature of his gimmick, that of the “generic luchardor” (when he’s really just a white guy from Canada). His promos were witty, his tweets were hilarious, and the love that he has for the business and his fans is nearly unmatched. El Generico is my Indy Wrestler of the Year…and he more than deserves it.

When I first laid eyes upon this tag team, I honestly didn’t expect much. I mean, they were named after a video game, how good could they be? Their first match was decent, but the more I saw of these guys, the more I wanted. They have a great “big power man, smaller agile man” tandem, and their chemistry is incredibly tight. Each match brought out something new and exciting. I found myself cheering for them to when, even when they were against a team of guys that, individually, I liked more. They are currently the PWG tag team champions, and I have a feeling they will be seeing more and more titles before their careers are done. The Super Smash Bros are definitely smashing. 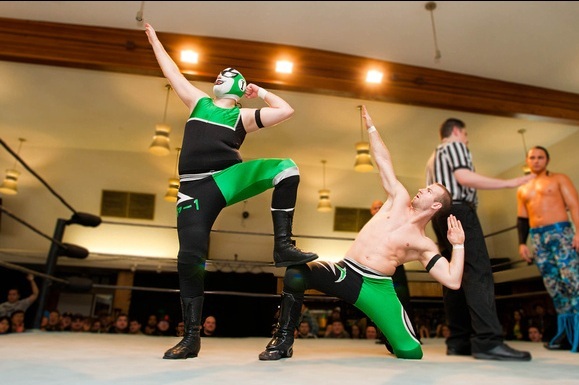 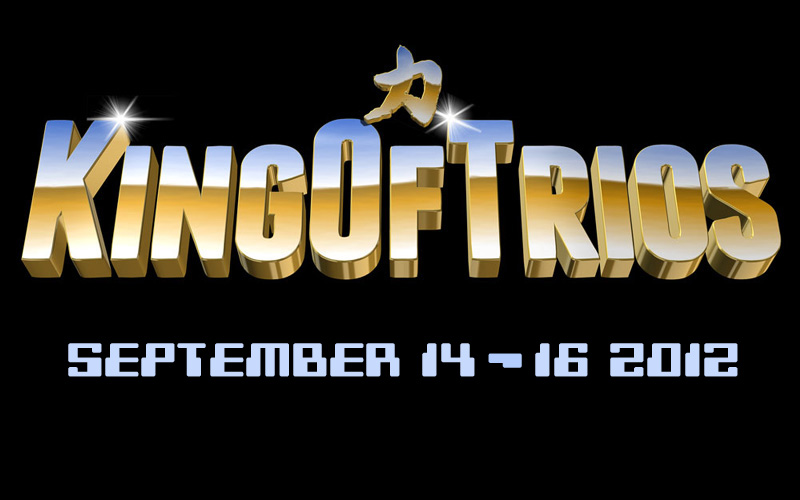 Every year, Chikara puts on a multi-team tournament consisting of, what else, trios. Some are well established factions and stables, who are together every year in and year out, like F.I.S.T. (First In Similar Tights), The Colony, and The Spectral Envoy. Others are blasts from the past like Team WWF (The 123 Kid, Aldo Montoya, and Tatanka) or Team Extreme (Tommy Dreamer, Jerry Lynn, and 2 Cold Scorpio). And then you have a team up of solid competitors, like Jigsaw, Quackenbush, and Toyota. These 16 teams compete over 3 days to be crowned the King of Trios! It’s an exciting tournament full of great tag team, singles, elimination, and of course, 3 on 3 matches. Prior winners include The Colony, F.I.S.T., and this years winner: The Spectral Envoy! It was a great event with some fun, exciting matches, for an all around grand time.

For over a year now, Johnny Gargano has defend the Open the Freedom Gate Championship in Dragon Gate USA. He’s taken on all comers, against the likes of Masato Yoshino, Chuck Taylor, and the three guys mentioned above. So for their final show of the year, they had a four-way elimination match, pitting the champion Gargano against the three men who the fans had voted his best opponents had been in 2012. And this match delivered! There was some amazing spots, some great counters, and in the end, Gargano managed to overcome an injury that almost took him out of the match at the hands of rival Jon Davis to retain his belt. If you want a match that shows you what the young, fresh competitors of the Indy circuit, as well as some of the best talent Japan has to offer, then this match is a great place to start. 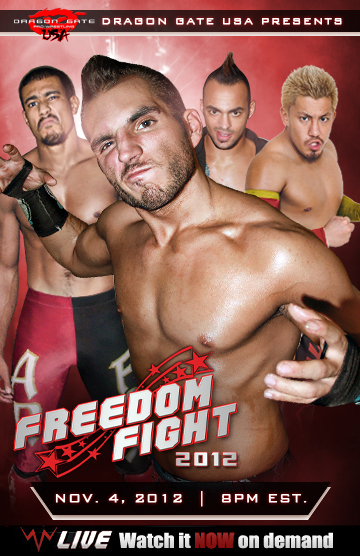 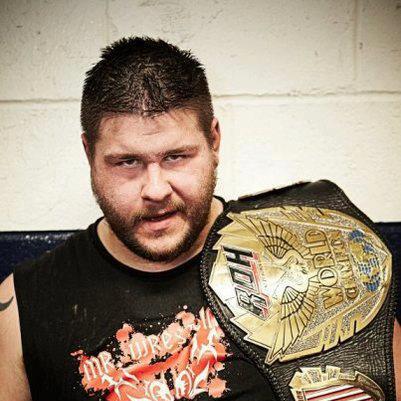 Kevin Steen, sometimes known as Mr. Wrestling, lately has been referred to as Wrestling’s Worst Nightmare. When he rejoined ROH after his defeat against long time rival, and former tag team championship winning partner, El Generico, many thought that Steen had seen the light, and was ready to make amends for his former ways. That feeling didn’t stick around for long, as Steen began to run rampant over the entire ROH locker room, defeating anyone and everyone in his path. He eventually found his way to a match with Davey Richards, and walked away with the ROH World Championship. Since then, not a single person has been able to stop him, as he’s defeated every person thrown in his path. Even Jim Cornette, who at the time was in charge of ROH, wasn’t able to escape being his victim. At the final show of the year, Final Battle 2012: Doomsday, one man had stepped up to end his reign of terror. That man was El Generico. But at the end of the day, despite coming up the victor in the past, Steen was able to silence his eternal rival, and goes into 2013 with the belt firmly around his waist. Is there anybody out there who can stop Steen? From the looks of it, we ain’t seen nothing yet.
And that’s it for my 2012 Year In Review! Do you agree? Disagree? Let me know why! 2012 was a great year for aniRAGE, and we look forward to making 2013 even better! So stay tuned for more right here at anirage.com!

While I make it a habit to watch WWE’s monthly PPV endeavors, this one holds a special place in my heart. Why is that, you ask? Well, this more or less marked the one year anniversary of my trek across Florida, and moving to Jacksonville! One year ago on the 16th (two days after the PPV), I packed up some stuff, moved in with my friend Jacob, and the very day I moved in, I went to our good friend Ashley Clark (aka Animebelle)’s house to watch my first group-PPV in a long, long. It was so fun, that we’ve done it just about twice a month for the past year! But enough of my silly reminiscing. Let’s get to the action!

Match 1: The Miz, Alberto Del Rio, and R Truth vs Kofi Kingston, John Morrison, and Rey Mysterio.
R Truth is one of the greatest things happening in WWE right now. Well, his matches aren’t anything spectacular, but on the mic he is a riot! That being said, this was your standard “put multiple people into a match together to give them screen time”. Plus, Rey was hurt, so he needed screen time plus a bit of protection. All in all it was a good match, but nothing really stood out. The Faces won in the end, which I accurately predicted! 1/1

Match 2: Mark Henry vs Sheamus.
IT’S A SHAMEFUL THING….LOBSTER HEAD! Ok, with that out of the way, they seem to be turning Sheamus face, which I’m ok with. He makes a good heel, but he’s good on the mic and always seems to have a good match. But Smackdown needs some people to go after the world title, and I guess a Big Scary Monster Henry is the best thing they have at the moment. I’d have liked to see Sheamus back up his words, but with Henry having taken out Big Show, Kane, and Kozlov recently, having him lose so quickly would’ve hurt. Now we can get a fun program between these two. Winner: Mark Henry, which nobody predicted. 1/2

Match 3: Kelly Kelly vs Beth Phoenix – Diva’s Championship.
I really don’t think anybody expected Kelly Kelly to walk out of here with the Diva’s title. Then again, it’s the Diva’s title, not the Women’s Championship, so who gives a flying fark, eh? The match was a typical diva’s match, but then again, nobody went to the bathroom. Mostly because we all wanted to see Kelly Kelly get squashed. Don’t get me wrong, she’s very hot and I gotta give her props for being from Jacksonville…but come on, Beth Phoenix. Kelly won, which nobody predicted. 1/3.

Match 4: Wade Barret vs Daniel Bryan.
Pretty much the best thing Booker T has done since coming back to WWE to be a commentator is the coining of the phrases “Fav Five” and “D-Bri”. Which I shouted constantly throughout this match. Was it a good match? You bet. Did D-Bri put on a hell of a show, and Barret keep up wonderfully? Yeah. That being said, Barret somehow won, and the only two chicks were the ones ones to predict that. Lame. 1/4.

Match 5: Randy Orton vs Christian – World Heavyweight Championship.
Everyone was pulling for Christian in this match. Don’t get me wrong, I love Orton, and the RKO is one of my favorite non-submission finishers…but the way that they have treated Christian these last few months is abysmal. I won a bonus point for calling Edge coming out, and I’m glad I specified “even if he doesn’t interact in the match, Edge’ll be there”. the match was decent, and Orton got pretty busted up…but he really needs to shave and stop smiling. Smiley bearded Orton is CREEPY. AS. FARK. Orton won, which only 2 people predicted (I don’t remember, because I wasnt’ one of them). 2/5.

Match 6: CM Punk vs John Cena – WWE World Champsionship Unification.
This was the match that everyone was looking for. Literally across the board, everyone predicted CM Punk to retain. Maybe predicted isn’t the right word…hoped/prayed/dreamed? It was a very entertaining match, and Triple Haytch didn’t make it all about himself. In fact, the only thing he really did out of the ordinary was refuse to do a double count-out, which I applaud. CM Punk won in controversial fashion, as HHH didn’t see Cena’s foot on the rope, but it was a spectacular victory. And there was no overturn, no false finish, no “oops, I made a mistake, let’s restart the match”. Nope, two men entered, one man left, with the title. 3/6.

Match 7: Alberto Del Rio cashed in Money in the Bank vs CM Punk.
And this nobody saw coming. I knew SOMETHING had to happen, as we still had about 10 minutes left on the PPV. So when Kevin Nash came through the crowd and Jackknife Powerbombed CM Punk to oblivion, we knew something was up. Triple H was like “OMG WTF BBQ?” and then ADR’s music hit. We all knew what was about to happen, and while we were sad that CM Punk didn’t have the title anymore, we knew that the RAW the next day was going to be awesome, with some great storylines opening up.

At the end of the day, we had a 4-way tie, with me, Kerby, Ashley, and Kayla all bringing in 3 points. I think that was the least amount of points that has ever won one of our “PPV Prediction Grids”, but it is what it is! At least I didn’t lose, mwua ha ha.

All in all, it was a great PPV, and shows is a great alternative to the constant disappointments from last summer. I look forward to see what the next month brings.