I’ve never been a huge fan of horror movies, but when I heard that David Tennant, the most amazing 10th Doctor from Doctor Who, was going to be in the remake of the 1985 cult-classic Fright Night, I knew there was a very good chance I was going to go see it. The story revolves around a boy who, after shunning his nerdy friends and being “cool” in order to get a hot chick, discovers that his new neighbor is a vampire! This vampire, played quite well by Colin Farrell, is slowly eating his way through the neighborhood. And when Charley Brewer (played rather meh-ly by Anton Yelchin)’s best friend “Evil” Ed (played by the always wonderful Christopher Mintz-Plasse) is taken out, he knows he has to fight back. It’s a fun, action-filled story with a menacing Colin Farrell, a boring Anton Yelchin, and hot chicks aplenty. But, as I assumed, David Tennant’s performance as Peter Vincent, stage-magician and surprise real-life vampire expert, took over the show.

The show just how much love Mr. Tennant has, the moment he arrived on screen, the crowd in the theater erupted into applause. He stole the show every time he was on scene. Then again, I might be a bit biased. 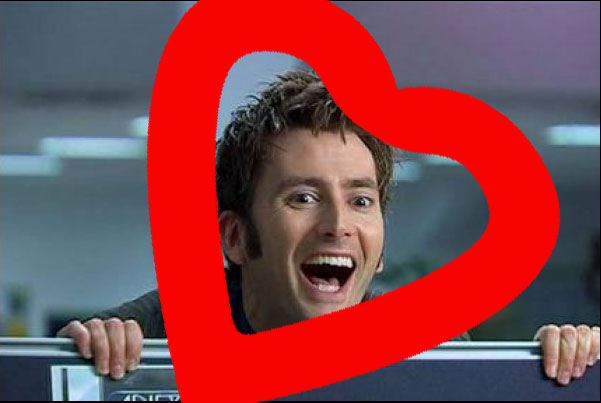 Don’t judge me, the bible says not to.

All kidding aside, the movie was very enjoyable, even if you aren’t a fan of gorey horror-suspense type movies. I might even purchase it once it’s out on DVD/Bluray (though more realistically, I’ll just stream it if/when it comes to Netflix). I give it 4 Sonic Screwdrivers out of 5.

One thought on “Fright Night (2011) Review: aka David Tennant is a Bad-Ass MoFo.”